I often see Bertie on his walks as he lives just along the road. He’s a tall, handsome black Lab who is usually fixated on collecting sticks, rather than meeting people.

I have memories of him with multiple small branches in his mouth as though he were collecting firewood!

In January I spotted what appeared to be a slow old dog struggling to walk. He looked different; he’d gained weight & his face looked sad. I couldn’t believe this was Bertie.

We had a chat in the road about his condition. He was struggling to walk and not eating well. We knew he had dramatic arthritis in his elbows, but I felt there must have been more going on than just painful joints. 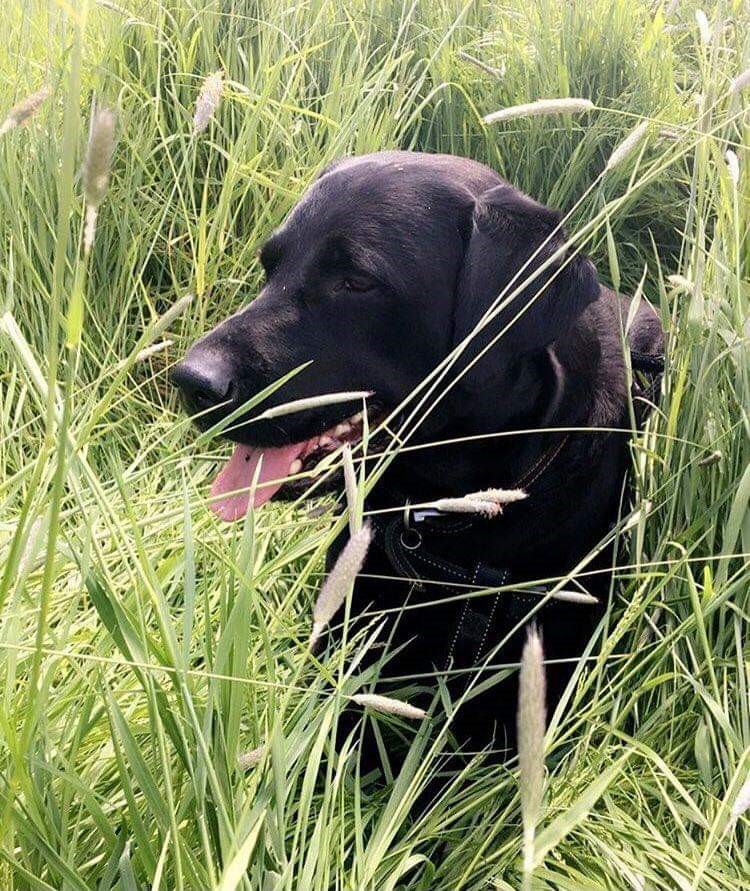 At just over 9, Bertie should still be bright, active and alert despite his elbow problem. We discussed a condition called hypothyroidism where the body’s immune system attacks the thyroid gland causing a reduction in function.

Thyroid hormone has many functions including setting the “metabolic rate” – if your levels fall too low then you can get low energy levels, slow heart rate, weight gain and poor hair growth amongst other things.

We saw Bertie at the practice the next day and started with a thorough clinical examination plus blood and urine tests.

This confirmed his thyroid levels to be alarmingly low (the machine just said <6 as it couldn’t measure any lower than this!). This should have been at least 13 but often its 20 or 30.

The other findings were even more worrying – he was anaemic, had a severe urinary tract infection and had kidney failure.

Bertie was hospitalised for further investigations and to start treatment. Over the next few days we also diagnosed a bacterial infection of the prostate gland and a mass in his spleen.

Various other tests ruled out other conditions, so we then had to piece together his conditions. It is likely that Bertie’s overall problem was indeed his under active thyroid which had some severe knock-on effects in his body.

His bone marrow had slowed down blood production causing him to become anaemic. It can also reduce immune system function making it easier for the infection to set up in his prostate gland.
Perhaps the most worrying thing was the renal failure.

His creatinine levels, (a good measure of the kidney’s waste filtering function), had gone up to 485 when it should have been less than 150. This is an uncommon side effect of poor thyroid function where the kidney blood flow is reduced to the point of affecting function and damaging the kidneys cells, possibly permanently.

Unfortunately, his arthritis medication, under these circumstances, may have also had a detrimental effect.

Bertie spent about 5 days in hospital having IV fluids, antibiotics for his prostate, thyroid supplementation plus stomach settling drugs to try to get him eating properly. By the weekend he was much happier, was keen to eat his special renal diet and there were positive signs of slow improvement in the kidneys & blood count.

I’m pleased to say that Bertie has continued to improve. His prostate infection took about 6 weeks to clear up, his thyroid levels have normalised though he needed an increased dose to stabilise things.

In early April his creatinine had reduced to 190 which is much improved but still not normal. His blood count is 33%; much better than it was but still a little low. He has lost nearly 5 kg of excess weight and continues to be happy, active and is back to eating well.

The final hurdle was to deal with the mass in the spleen which we had been monitoring over the past 3 months – life threatening splenic tumours are quite common in older retrievers, so it was important to remove this once we felt it was safe to do so.

We also opted to castrate Bertie which would greatly reduce the risk of a repeated prostate infection. Brave Bertie has come through this final stage with flying colours.

He will need thyroid medication for life, and we will keep monitoring his renal function and blood count. Of course, he also has his ongoing elbow arthritis to contend with; we need to be very selective about medication because of his kidney disease.

It’s been a tough 6 months for Bertie and his family who have shown great dedication to their beloved canine friend. We can now be pretty optimistic about his future and I’m pleased to say that he no longer looks like a plodding old man as he searches the field for sticks! Good old Bertie!