On a recent family trip to Scotland we had a wonderful stay in The Colintraive Hotel which lies in a tiny village on a quiet part of Argyll’s “Secret Coast”.

Our host and publican Patricia was very welcoming both to us and our Miniature Schnauzer Bella and inevitably the conversation turned to our dogs. The story Patricia told about her black Labrador, Lewis, was heart-warming and quite amazing and she was happy for me to share his story with you. 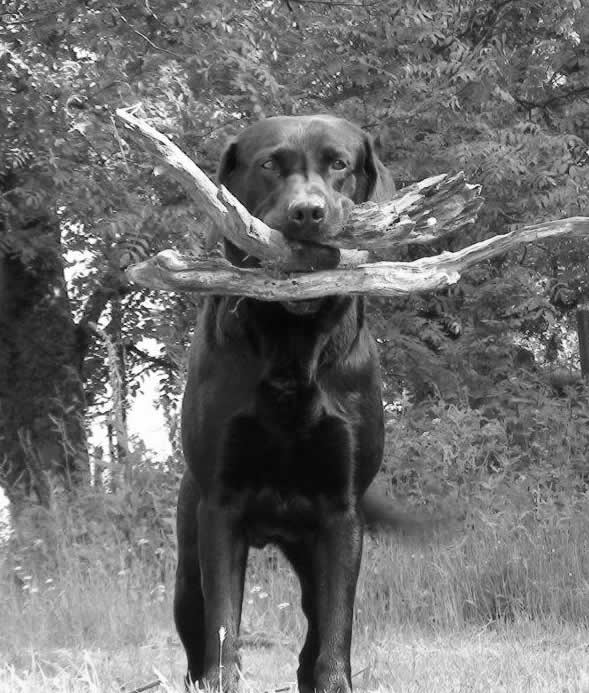 It started when Lewis was only one year old. He was a happy, fit young male Labrador who had seemingly developed normally until he started to get a swollen tummy and couldn’t stop weeing. The Vet was understandably puzzled by his symptoms and soon referred the dog to a heart specialist who was able to diagnose tricuspid valve dysplasia.

This condition is a malformation of a heart valve which, when functioning correctly, helps to push blood returning from the body through into the lungs to be replenished with oxygen.

Without this function the body begins to be starved of vital oxygen and blood pressure. The circulation responds by retaining fluid and constricting arteries. This in turn leads to swelling of the liver and diffusion of fluid out of the abdominal veins and into the abdomen. The outlook for Lewis was pretty grim; without something miraculous he would have to be put to sleep before too long.

Lewis was a classic pub dog. He was friendly and hugely popular in Colintraive. He had a large group of friends and supporters who were upset by his condition and the seemingly hopeless prognosis ahead.

However, a glimmer of hope was offered by an amazing surgeon called Dan Brockman at the Royal Veterinary College near London who ran the only surgery department in the UK with the facilities to perform a heart valve replacement.

Patricia was made aware of the risks and the ground-breaking nature of the surgery and with the well wishes of his friends in Scotland, Lewis was taken to the Vet College for what was to be one of the first dogs in the UK to have a bovine heart valve replacement whilst being maintained on state of the art heart by-pass equipment.

The operation was a success and Lewis made steady progress over the five weeks he remained in hospital. At last Lewis was allowed home where he was able to return to the normal active lifestyle he grew up with.

At the time Lewis was one of only a handful of dogs to have had this operation and he was the only one to survive more than a year post op. In fact, he beat all the odds and lived for several more years.

Lewis finally succumbed suddenly to his condition. He had been perfectly normal for four years after his break through surgery and was on a morning walk on the beach outside the pub where he had spent many an hour walking and exploring. With no warning Lewis collapsed and died on the beach. He had lived an exciting and active life since his operation and passed away suddenly without any suffering.

Patricia understandably found it difficult to replace Lewis but circumstances of a neighbour meant that a young black Labrador became available a few months later.

Before long Caesar became the new pub dog at the Colintraive Hotel. He naturally has a very different personality to Lewis but is just as well loved by the villagers of this pretty Scottish village.

We loved our stay in Colintraive and really enjoyed the hospitality of Patricia our host. It was great to hear about her brave dog Lewis and his amazing operation. We look forward to visiting again one day and would recommend it as a perfect spot to get away and enjoy the peace and beauty of this part of Scotland.