Bunnies and Bumbles
by Jason Williams from Bicester Vets 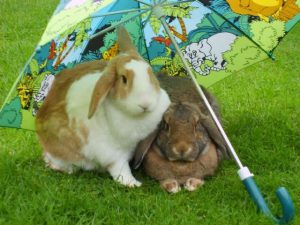 Rabbits have become very popular pets over the last 10-15 years. In most cases they are lovely, cuddly, fluffy pets whose personalities provide years of fun, interaction and enjoyment.

Not all rabbits are like this, however, and many people have been surprised that some rabbits can have a nasty streak. Many years ago one of our receptionists ended up in hospital with an infected arm after being bitten by a rabbit!

Rabbits have an interesting digestive tract and as such, have specific nutritional requirements. Their hind gut is adapted to ferment the fibrous parts of plants which we humans are unable to digest. The bacteria in this part of their intestine help to break down the fibre, and in doing so, produce essential nutrients which the rabbit needs to survive and thrive.

However, because this digestion occurs in the lower part of the gut there is no way of the rabbit absorbing the nutrients. Instead they have a natural practice called coprophagia where they produce rich, soft green faecal balls which they re-eat. On the second pass the newly released nutrients can be absorbed from the small intestine before finally being passed as the firm dark “bumbles” which we’d all recognise as rabbit droppings.

So what should we feed a pet rabbit?

Rabbits in fact thrive on a diet of low nutritional content but with plenty of this essential fibre. Fibre is abundant in grass & hay (dry grass) but is in lower levels in fruit and vegetables. Thus we recommend that a rabbit’s principle diet is grass and hay with small amounts of vegetables for variety & interest only. In fact, vegetables can have too much mineral content which can lead to urinary tract problems and bladder stones.

The other important feature of a rabbit’s diet is the need to chew long stalks. Rabbits have continually growing teeth and they need the grinding action involved in chewing long stalks to keep the teeth worn down evenly.

Rabbits fed on primarily pellet diets or on short hay can suffer from overgrown and deformed teeth which create spikes in the mouth. These spikes can lacerate the tongue causing pain and the inability to eat.

There are campaigns to try to improve the welfare of pet rabbits as too often they are kept primarily in a small hutch with little in the way of stimulation or exercise. Rabbits make intelligent and interactive pets. They enjoy company and can be house trained in many cases. There is nothing better for a rabbit than the opportunity to run around the garden grazing on the grass and behaving … like a rabbit.

Here are five facts about rabbits:
1. Rabbits are naturally a “prey” animal which makes them very alert and prone to springing away without warning
2. Rabbits have nearly 360 degree vision due to their eye position.
3. Digging is a natural behaviour for rabbits. Their hind claws are surprisingly large & strong.
4. Rabbits become sexually mature after a few months and can breed very readily!
5. Myxomatosis and Rabbit Haemorrhagic Disease are 2 common and fatal viral diseases. They can both be protected against by vaccination.