Lungworm spreading within the UK 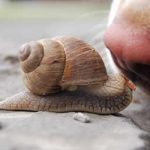 A parasite of dogs has become established in the UK and is spreading to new areas all the time. The worm larvae are picked up by eating slugs and snails.

The larvae “migrate” from the dog’s gut into the bloodstream & lodge in the pulmonary artery (between the heart and the lungs). These adult worms lay eggs which pass into the lungs forming nodules which can lead to the symptoms of the disease.

The eggs hatch to become immature larvae where they are coughed up & swallowed, only to pass out in the dog’s poo where they can again infect slugs and snails.

Signs of the disease include coughing and breathlessness but also bleeding disorders which can be fatal. Dogs might become pale from anaemia or they may have a bleeding nose or bruising on the gums or skin. General symptoms such as vomiting, lethargy and pain can also be seen.

There are now very good blood and faecal tests which can help detect the parasite and thankfully the disease is treatable. Dogs will often make a full recovery if the condition is detected and treated in time.

Prevention is always better than cure so ask us about how to protect your dog from this life threatening parasite.

There is a great website full of information for owners about lungworm and other parasites. They have now even developed an app for your smartphone which contains lots of useful information as well as reminders for parasite control products.

P.S. If your dog is on our Healthy Pets Plan then rest assured that they have lungworm protection included.