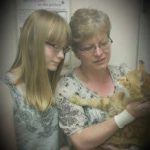 Mrs Lamb awoke this morning having had a dream. She dreamt that her missing cat Sam had finally returned home after eleven months away, but sadly this wasn’t the case.

Sam had gone missing just after the family had moved from Ambrosden to Southwold in Bicester. They had diligently kept Sam indoors to help him become acclimatised to his new home. Sam, however, had other ideas. He had always been a hunter and was going stir crazy at being kept inside.

That’s when he discovered an unknown open second floor window where he was able to escape onto the conservatory roof and away into the night.

That was September 2013 and since then the family had continually been searching around the area as well as on lost-pet websites and by posting updates on Facebook in the hope that someone would have some news about Sam. They had had many false alarms and even some awful sightings of dead ginger cats but thankfully none of them had been Sam.

Eleven months later and just a few miles away, a ginger cat turned up in a garden asking for food. The residents liked the cat but were about to go on holiday so they were anxious to try to do something about the friendly chap who’d appeared in their lives. Fortunately, they brought him to Bicester Vets where he was scanned & because he was micro-chipped it enabled us to contact his owner Mrs Lamb.

So Sam has now been reunited with the Lamb family. He was last seen stretched out on Mrs Lamb’s bed reacquainting himself with the new home that he had only spent 2 nights in before going missing all those months ago.

Mrs Lamb is thrilled that her special cat Sam is at home at last. She can’t believe that he is back with them and doesn’t seem any worse for his adventure. She is extremely grateful to Steve and Marak who brought him in to be scanned and also to anyone who may have been caring for him whilst he was missing.

She is also very grateful to Bicester Vets for re-uniting them and especially for ensuring that her cat was microchipped!