No more sticks for Molly 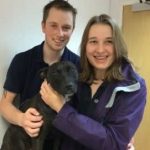 Molly always loved a stick but after the past month’s experience, her owners have vowed never to throw another stick for her again.

Molly was brought to see us a day after she had run after a stick and hurt herself. When she was examined under anaesthesia it became clear that the stick had caused a major injury in the back of her throat and esophagus. She was quickly referred to a specialist centre for assessment where she underwent a CT scan and exploratory surgery.

The specialist surgeon discovered that she had indeed torn her esophagus with the stick and this had to be stitched back together. The tissues then had to be flushed clean and drains were left in to allow any fluid build up to be removed.

Unfortunately, a few days later it became apparent that the esophageal tear wound had broken down partly and food was spilling into her tissue spaces, so a further operation was required. Molly was in hospital for about 2 weeks and the bill came to about £8000.

Thankfully Molly is back to her old self, eating well and playing happily. One thing she is not doing any more, however, is chasing sticks!