Worrying diseases sitting on our doorstep

I guess everyone knows that vets diagnose and treat pets in consultations, as well as performing various surgical operations on our patients.

You might not know, however, that vets sometimes do work on behalf of the government as an Official Veterinarian or OV. 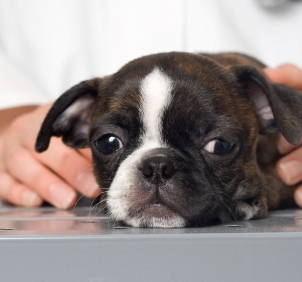 For farm vets this might involve TB testing but in a small animal practice it usually involves checks and export paperwork for pets emigrating abroad and also completion of PET passports.

I recently went to a congress related to this OV work where I learned about the many worrying diseases sitting on our doorstep in Europe. Changes in climate and travel patterns have brought some of these parasites closer to our shores and recently there was an outbreak of a tick transmitted infection called Babesiosis in Essex.

Perhaps the talk which left the biggest impression on me was given by a lady from the City of London’s Animal Health & Welfare Services.

She gave a fascinating talk about The Scale of Illegal Puppy Importation which seems to be rife at the moment.

Part of the problem seems to be the demand for young puppies in the UK and also the ease with which unscrupulous people can smuggle litters of young puppies into the country, often under luggage in the boot.

These puppies are then sold through agents in London, often from websites like Gumtree. The puppies tend to be coming from Eastern Europe and sometimes are taken away from their mothers at a very young age so that they can get them to the UK at an age to suit the UK demand for 8-10 week old puppies.

However, it is illegal to bring a puppy into the country until it has been chipped and had a Rabies vaccination (which they must be 3 months old to have) then they must wait 3 weeks before coming to the UK. This means that a puppy can’t legally be imported until it is around 15-16 weeks old.

Unfortunately, there wasn’t an obvious answer to solving this problem and of course the government service is understaffed and under-resourced like so many services these days. Perhaps if people in the UK stopped buying dubious pups then the demand may reduce enough to make the smuggling less attractive.